On November 6, WWE will be releasing a DVD and Blu-Ray titled nWo: The Revolution, which will look back at the history of one of the most controversial and popular factions in the history of pro wrestling.

The DVD will contain three discs while the Blu-Ray version will have two in addition to some added content.

“In the mid-90s, a malicious group of renegades ‘invaded’ World Championship Wrestling, shaking the landscape of the sports-entertainment world and turning the tables on Monday Night War. Little did anyone know, the shock of the century was yet to come,” reads the preview for the title.

“When Hulk Hogan did the unthinkable and turned his back on the fans, The Outsiders had officially become The New World Order, and chaos ensued. Now, relive the history of one of the most infamous and controversial factions of all time with this brand new documentary.”

The new look at the nWo – another DVD was released years ago – will feature “the inside scoop from those who lived it,” including Kevin Nash, Hulk Hogan and Eric Bischoff, as well as new interviews from Superstars. It’s believed that interviews from the first nWo DVD will be re-used especially those who are no longer working for WWE.

This release will also have matches from nWo members and interviews from the glory days of WCW.

You can see the artwork for this disc below. 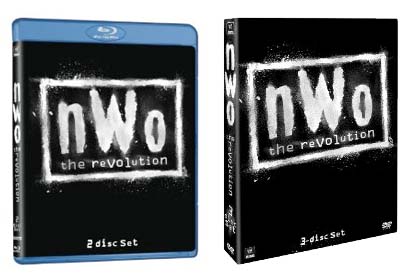