MMA is a combination of different martial arts and fighting techniques, including judo, karate, wrestling, boxing, and Muay Thai, which is a form of boxing in Thailand. Whether you’re new to the sport or you are a regular participant in the octagon, it’s essential to have the right gear. Participants in the ancient battle forms must be able to protect their hands and knuckles while still having the ability to grapple and move around unrestricted.

MMA uses some boxing techniques. However, the two sports are uniquely different, and the same gear won’t work for both. Unlike boxers that use a fighting stance that keeps their feet on the ground, MMA fighters spend time all over the ring in various positions. To stay on top, they need MMA gloves that provide protection while allowing movement. Boxing gloves completely cover and pad the entire hand, including the knuckles and fingers, to prevent bone bruises and breaks. These won’t allow you to grapple or wrestle on the ground with your opponent.

Additionally, MMA gloves are much heavier, adding an extra four ounces to eight ounces of weight to each hand that can reduce movement, decrease speed, and cost you that round or entire match. It’s essential to choose ones with the right balance of padding to protect your hands, but not so much that it restricts movements. 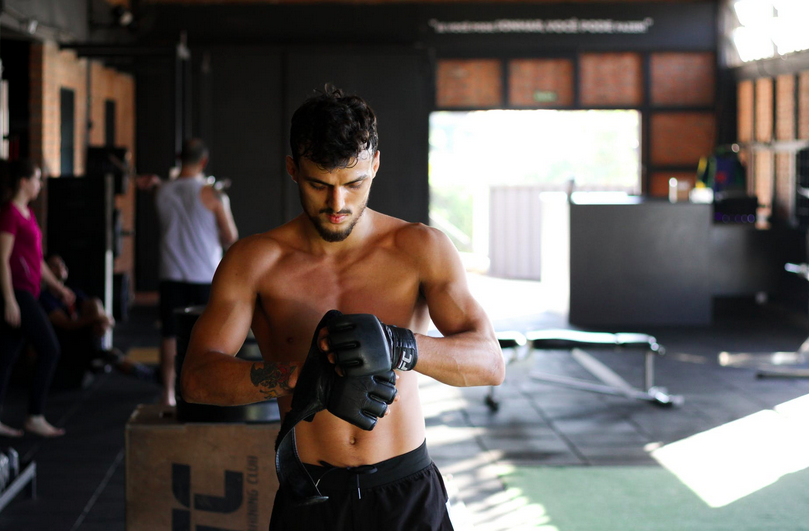 The purpose is mixed martial arts. But boxers and MMA fighters can use different gloves for sparring, competition, and working with a heavyweight bag. It might sound confusing with three, but there is a difference between sparring and competition-style gear.

When you’re just practicing with a human partner and not equipment, you want to have some impact, but not one that will hurt them. A sparring partner is normally a coach or teammate. A little knockdown play is fine, but without some extra padding, the wrong move could cause a costly injury to an ally, and even render them unconscious.

With protective coverings for going one-on-one with the heavy bag, you don’t need as much padding to protect the hands and fingers. Nonetheless, pay attention to the heavyweight bag. If it doesn’t have much padding, you may want to use sparring or competition gloves instead to add more protection between your thinly covered bones and the inanimate object.

In competition, whether it’s a match sanctioned by Dana White or a fight at a local club, the goal is to beat your challenger. Here you need to have enough impact with each hit to inflict damage. That’s not to say you want to cause severe injuries during competition. With these matches, the right gloves allow you to hit the opponent hard enough to win, but not so much that you cause permanent harm or even kill them.

Mixed martial arts involves fast reflexes and fluid movements with little protective gear. Although they protect their body and strike with their hands and feet, MMA fighters need hand and knuckle protection.

Whether you’re looking for sparring, training with a heavyweight bag, or heading into the octagon with your nemesis, there are two different palm designs that have various benefits and potential disadvantages. Open-palm styles are more breathable than traditional, closed-style gloves. These have adjustable wrist straps to hold them in place. Perforated palms give some airflow and still look like regular gloves. Choose whichever option works best for your style. If sweaty palms have caused difficulties with your performance in the past, consider the newer, open style to reduce these problems.

Another important reason to invest in MMA gloves is to get the size right. After accounting for the right thickness, purpose, and design, you want to have the right overall fit. Although they only come in small, medium, large, and some are available in extra-large, getting as close to the size that fits you will give you an advantage on the mat.

Gloves that are too big will be bulky, making it hard to move your hands, and can lead to injuries from areas lacking protection and trying to fight with gloves that aren’t stationary. Using a pair that’s too small can also restrict movements and cause circulation problems and damage to your hands in some cases.

When choosing, remember going with lower prices or the wrong styles can increase your chances of an injury and be much more costly in the future. With the right MMA gloves for sparring, competition, and bag work, you’re ready to grapple with your next opponent in the octagon.