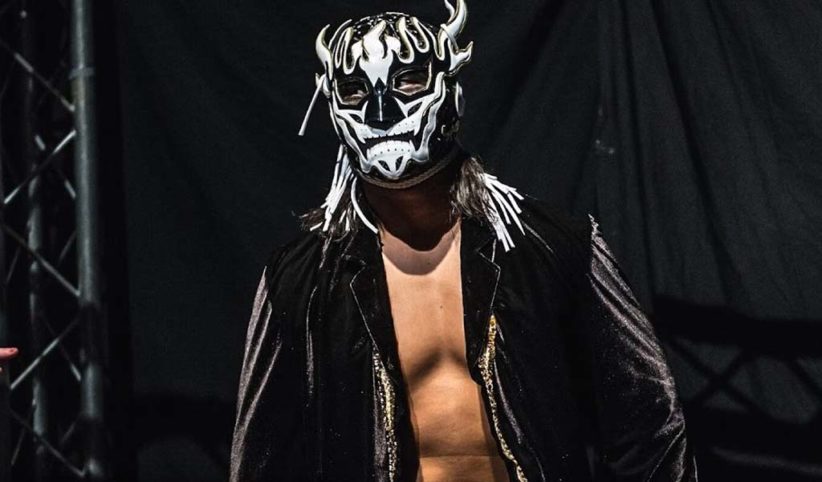 It’s October 27th, and it’sstill Road To Power Struggle–Korakuen Hall, but tonight the main event pits Bushi & Shingo Takagi against Yoshinobu Kanemaru & El Desperado. That’s right, it’s Los Ingobernables and Suzuki-Gun again, but this time, I have a dog in the fight: I love the team of Kanemaru and Desperado far more. Now, let’s get it on!

A few chants for Umino. Yoshida seems to be feuding with him, which is sad, considering Yoshida started his New Japan tenure in August a step above Young Lions. I expected Umino to win with a Boston Crab on one of the Young Lions, but, to my surprise, it was:
Ren Narita makes Uemura submit to a Boston Crab. Umino and Yoshida almost come to blows after the match. Interesting.

Taichi comes out with his stablemates, but sits down to commentate. CHAOS do their best Suzuki-Gun impression and attack Suzuki-Gun, while still in their clothes, before the bell rings. They take Minoru and TAKA to the outside and dominate them there, until Suzuki reverses Ishii’s whip into the guardrail, and then goes to work with a chair. This continues, but eventually Ishii starts to no sell. This takes him far enough, but eventually Suzuki-Gun take over the initiative and Ishii & Suzuki brawl to the back. This match is already ridiculous as TAKA taking out Goto, shoot or work, is pretty unlikely. He hits Go To Heaven and then GTR for the pin.

Goto then grabs the mike. Chants of “Goto!” I can understand what Goto says even without translation: “I want the NEVER Openweight title back. Taichi, since your match at Power Struggle is off, because Ospreay is hurt, why don’t you take me on?” Taichi throws the belt into the ring. Not sure what he says, but he does say “One more chance.”

Long and fun match. Chuckie T took most of the beating early on, even though CHAOS started by attacking OGs, not the other way around. Finally he tagged out to Okada, who started hitting Jay White, but, of course, GEDO saved Jay White, and Gedo was nailed instead. All the members of CHAOS teamed up, and Best Friends, Rocky and Yano even shared a hug–it was fun seeing Yano help out instead of being cowardly. Finally it came down to Rocky Romero and Gedo and after Sliced Bread #2 seemed like CHAOS would win, but Jay White hit Blade Runner on Romero and Gedo pinned him. After that, Okada started beating Jay White, but lost the numbers game. Things looked bleak, as the four surviving Clubbers were beating up Okada, and then…. Hiroshi Tanahashi ran in. He clobbered Tonga Loa, took out Fale’s knee cap and helped CHAOS out with Tama Tonga. Finally Okada and Tanahashi teamed up, to a huge pop from the crowd,to double elbow Switchblade. Jay White ran. Tanahashi then reached his hand out and Okada shook it. Huge pop from the crowd.

Taguchi & ACH set a new tasteless stupidity record by coming out not just in rugby uniforms but in their opponents masks. Taguchi pinned Tiger Mask after a cradle.

Fun match, which luchadors dominated, but YOH pinned Soberano after a double flapjack.

Very good match. Ishimori pinned Kushida with a Bloody Cross. Seems like Kushida vs Ishimori title match is being set up.

Fantastic match, with all the guys hitting the moves in their character. For the finish, looked like it was going to be another MX, but Desperado picked Bushi up, kneed him in the groin. Ripped off his mask, and one El Es Culero later, Suzuki-Gun’s team had two more points.