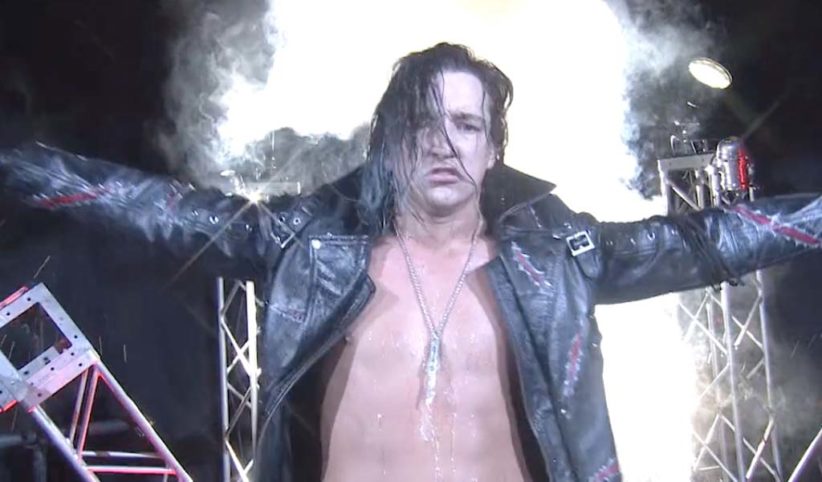 Part 3 of Destruction is taking place in Kobe. Seems like this event is taking place in Southern Japan in its entirety. Tonight, the main event is a Japanese equivalent of a Money In The Bank match, with Tanahashi putting up his title shot against Okada. Since Omega has already started talking trash about Tanahashi, I do not expect the match to change, but NJPW could be swerving us.

These two guys continue their mini-Young Lion feud. Time runs out with Tsuji applying the Boston Crab on Uemura, a finish I believe I have seen before.

Kanemaru & Desperado attack the faces before the match. They do not win, however, as Tiger Mask pins Kanemaru with La Magistral. It looked like Liger challenged the Junior Tag Team Champs for their belts after the match.

Interesting that this is happening. Usually, if the veterans are split into duos, Nagata is with Nakanishi and Kojima with Tenzan. And after the last Destruction, Nagata criticized Kojima and said that he keeps fighting because he is hoping for a big comeback. Surprisingly, the veterans win, when Nagata pins Yoshida with a back suplex. Well, if they were to win, this would be the match-up where I would think it’s most likely to happen.

Beretta pins Lance Archer with La Magistral after a Killer Bomb. Beretta spent nearly entire match tagged in. All these four are great, but the series has not been as good as these guys, so I wouldn’t want to see another, they are obviously better suited for different opponents.

Very cool finish. Robinson tags Henare behind White’s back, Robinson and Finlay hit double superkick, Henare hits flying cross-body, then a spear, at count of 2 Ospreay and Yoshi-Hashi break it up, they are thrown to the outside by Juice and David, who go for a double plancha, but Chaos side-steps them and nails a double-superkick. Yoshi-Hashi gets in and holds up Henare for White…White of course accidentally forearms Yoshi-Hashi and Henare rolls White up, 1,2, kick out, Blade Runner, 1, 2, 3. Ospreay checks on Yoshi-Hashi and White tries to explain, but Yoshi-Hashi is having none of it, so White starts telling him to wise up, Ospreay gives up and leaves and tells Yoshi-Hashi to follow him. Chaos tension continues.

EVIL pins Taka with the STO.

Best New Japan match since the Tanahashi vs Okada from G1 Climax 28. Tanahashi and Okada were battling each other at the top rope, when Tanahashi threw Okada off and simultaneously landed on him. Two High Fly Flows later he got the 3 count. This might have been better than G1 for the same reason G1 was great, but here the winner was predictable.

Jay White runs in and Blade Runners exhausted, hurt Tanahashi. He then stomps away at Okada, turning on Chaos. Young Lions run in, but he destroys them and keeps punching Okada. Here comes Yoshi-Hashi. He attacks White, but as he turns to console Okada, he gets a chair shot and thrown to the outside. Time to chair Okada, but here is Gedo. Gedo takes away the chair and helps Okada up. Suddenly you realize that Gedo is behind Okada and Jay White gives the “throatcutter” sign, and Gedo chairs Okada. Gedo: “Please welcome Switchblade, new era, coming soon.” On his way out White yells “I am the future.”

Review: The World Of The Rock book by DK