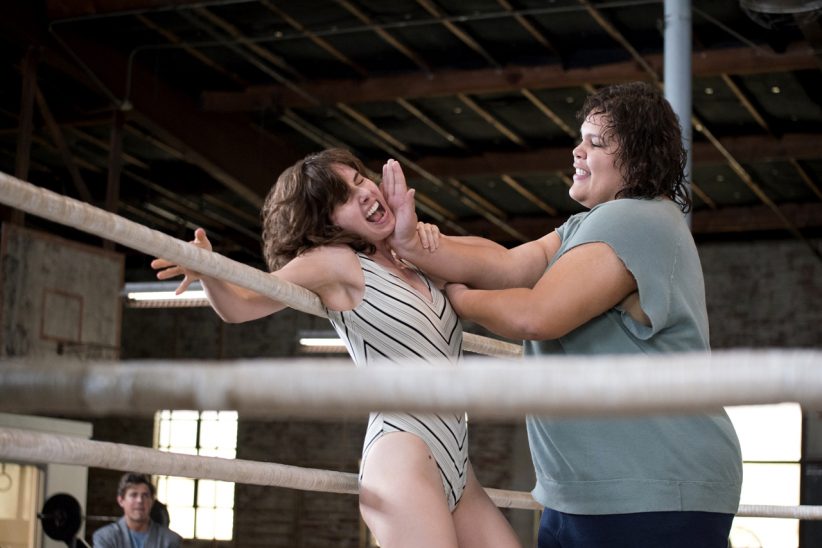 Streaming giant Netflix will have something for wrestling fans on June 23 when GLOW, an adaptation of the Gorgeous Ladies of Wrestling 80s television show, is released in all Netflix territories.

The comedy-drama television series is created by Liz Flahive and Carly Mensch and stars Alison Brie in the leading role as Ruth Wilder, an out-of-work, struggling actress in 1980s Los Angeles who finds one last chance for stardom when she’s thrust into the glitter and spandex world of women’s wrestling.

Among the big cast you will meet Britney Young, somewhat of a newcomer who will play the role of Carmen, the daughter of a wrestling dynasty family who wants to be a wrestler but is not yet ready for the Hollywood limelight. “She is very kind, a bit shy and is very excited to be a part of the Gorgeous Ladies of Wrestling,” Young described her character.

Britney was born in Tokyo, Japan, but raised in Eagle River, Alaska, a community within the Municipality of Anchorage situated on the Eagle River between Joint Base Elmendorf-Richardson and Chugach State Park in the Chugach Mountains. She graduated from USC School of Cinematic Arts, a private media School within the University of Southern California in Los Angeles, and worked in film and TV production for a few years before deciding to jump from behind the scenes to in front of the cameras.

She is a big bookworm, currently on her 29th book this year, and loves to dance and swim as well. Young is a fan of the New York Giants and Los Angeles Lakers but feels that she’s terrible about talking about herself, “which is probably why I had terrible time on all of those dating apps,” she joked.

Young’s career in Hollywood started behind the scenes but she always dreamed of being an actress. “Growing up I wanted to be that Disney channel, Raven Symone triple threat: singer, dancer and actor. So I always had the goal of becoming an actor, but after college I decided to help pay off my student loans I would go into the production side of film and television,” Young said.

Watching a constant stream of actors and actresses coming to audition for shows that she worked for pushed her to start doing what she really wanted to do: jump in front of that camera lens. “So I reached out to friends who were actors and asked for their advice on how to transition into acting, and one of my very dear friends Marquel put me in her web series and from there I met my manager who starting sending me out on auditions.”

One of those auditions was for GLOW. She admitted that she didn’t know about the original Gorgeous Ladies of Wrestling show back in the 80s when she got the information to go and audition for producers. The casting office sent over a YouTube clip of one of the opening raps on the original show and that was enough for her.

“After watching it for the first time, I said to myself ‘what is this? I have to be a part of it!’ and it sent me down a YouTube rabbit hole where I watched pretty much all of the available clips of the show online,” Britney told us.

She also got her hands on the documentary G.L.O.W.: The Story of the Gorgeous Ladies of Wrestling on DVD, the inspiration for the showrunners to remake the series. The documentary has now been added to Netflix and is a good introduction to the show ahead of the June 23 release of the new show.

Britney described the audition process as great because the appointment e-mail from her agent said not to wear any makeup and come in comfortable clothes! “They were speaking my language. Any audition where I don’t have to wear makeup and gym clothes, I’m in,” she laughed.

Young’s reading was with casting director Jen Euston, a person who worked hard with her to get the scenes down. “I will be totally honest though, even though I had fun I didn’t think I did a great job. I really wanted the role, and I think that made me a bit nervous,” she explained.

Britney said she called her agent after her audition ended to apologize for “failing” during the process. But her disappointment quickly changed when later that night she was informed she will get to perform in front of the show’s creators and executive producers. “I was much more confident this time around and I walked out of that audition and knew it was mine. Because I felt so good coming out of the callback, I was nervous for the next few weeks when I hadn’t heard anything.”

Even though she wasn’t officially part of the cast yet, one day she got a call to go for a stunt audition with stunt coordinator Shauna Duggins and wrestling coordinator Chavo Guerrero Jr. She couldn’t do much since she wasn’t technically yet part of the cast and the show’s insurance didn’t cover her, but she was determined to leave an impression and o something before leaving.

“So I asked Shauna to jump into my arms and she did it, it was easy,” Britney said. “But then Chavo asked me if I could pick him up and I said lets try, and I did!” Britney thinks that is what sealed the deal for her. “That following Monday I got that call that I got the part.”

That call came on the second Monday of August 2016, one month before Netflix officially announced her as the newest member of the GLOW cast. “At the time of the announcement we had already been training for several weeks. We trained the month of August and then started shooting in September,” Britney said, adding that she got to her first training session with the rest of the cast a week after she received the call.

Showing the girls the ropes was the job of Chavo Guerrero Jr., the 23-year wrestling veteran who forms part of the legendary Guerrero family. Having wrestled all over the place including WCW, WWE, TNA, and Lucha Underground, Chavo is one of those who was perfect for that role considering his vast experience.

“Chavo is fantastic,” Britney said. “He was the best coach, so supportive and very informative. And its so great his uncle Mando actually trained the original G.L.O.W girls so its cool to have that connection.”

Wrestling training lasted four weeks before filming commenced and obviously continued as the season went along. Chavo showed the girls the basics: how to get into the ring, proper footwork to move around the ring with your partner, basic wrestling moves which then turn into proper sequences and full choreography.

“What I loved about Chavo was that when the scripts came out he and our stunt coordinator Shauna would go through them and figure out what moves each girl need to do. But instead of just teaching that one girl that move, they would teach all of us. So we were always prepared should we need to do that certain move in another episode,” Britney explained.

“I am now a fan! I have been watching shows like Lucha Underground, which actually a few of us girls went to one of their exhibitions while we were shooting to see our ring technician and Lucha’s senior referee Marty Elias. It was fantastic,” she said.

Chavo Guerrero and Marty Elias were not the only two names that wrestling fans can recognize from this show. The main cast also included Kia Stevens, better known to fans as Awesome Kong in TNA and Kharma in WWE. But what was it like to work with Stevens, who for the majority of her career she portrayed some pretty intimidating characters on television?

“Alright, I hate to shatter any image of Kia, but she is the sweetest human being I have ever met! It was so inspiring to work with her, especially for me.” Britney said that she was a bit nervous coming into training since as a bigger girl, she wasn’t sure what her body was able to do. Despite always being athletic and playing volleyball and cheerleading while growing up, she never wrestled before.

“But the first time I saw Kia wrestle in training I said to myself, ‘if she can do it, I can do it!’ and after training I even told her that to her face. She just looked at me and was like ‘hell yeah, wrestling isn’t about size’ and from there on I was just in awe of her!” It wasn’t just Britney who was in awe of her, but the rest of the cast as well as Stevens taught them many little tricks that came in handy. “It was so reassuring to have her training with us.”

As you can imagine, filming a movie or a television show is a long and sometimes painful process. After a month of training, all ten episodes were filmed in four months last fall. Those ten episodes included working 12 to 14 hours a day, kicking off the day at 6AM with hair and makeup. Fortunately for Young, the character she plays likes the natural look, “so my hair and makeup really only took about half an hour so I appreciated that extra time to sleep in!”

After hair and makeup, it’s then five or six hours straight of filming. Following a 30-minute break for lunch, it’s back to hair and makeup and an additional five to six hours of filming to wrap up the day. Young was full of praise for the crew behind the scenes, who had their hands full with a large cast and things certainly could have taken a lot longer, “but they handled it like champs.”

The long days on set however did not affect the cast’s morale or spirit as laughing and telling jokes was a good way to make the day go by faster. “We really are one big family. It was really enjoyable on days where we actually had to wrestle. To see the looks on the crew members faces and to hear all of the rest of the girls cheering you on was so exhilarating.”

With the season yet to start and impossible to say if it will be a big hit within the Netflix universe, so far there is nothing official about a second season, although Young hopes that it will continue past this first season. “The storylines are so unique and so funny, and our cast is hilarious! Our writers give us such great material to perform, I really hope that everyone enjoys it and that Netflix brings us back for a second season…and more,” she said with a smile.

The original Gorgeous Ladies of Wrestling show went on for four seasons with 26 episodes each filmed in Las Vegas. Young hopes that the women who participated in the original series will get the recognition they deserve with this Netflix series. “The original G.L.O.W. girls and the show really did make an impact on the female wrestlers who followed and the wrestling world as a whole,” Young said.

When the new season starts in a few weeks, wrestling fans will surely start Googling the names of the cast to get more familiar with them. Unfortunately for Britney Young, she shares the same name with an adult movie star whose filmography trumps everything else on the first page of Google search!

“Yes, I am very aware of the other Britney Young who currently is blowing up on Google, and good for her I wish her the best and all the success in her line of work,” Britney said.

All ten episodes of GLOW land on Netflix on June 23 and will be available in all Netflix territories. Go to Netflix.com to start your subscription.

Ariane “Cameron” Andrew on the cover of Icon Magazine