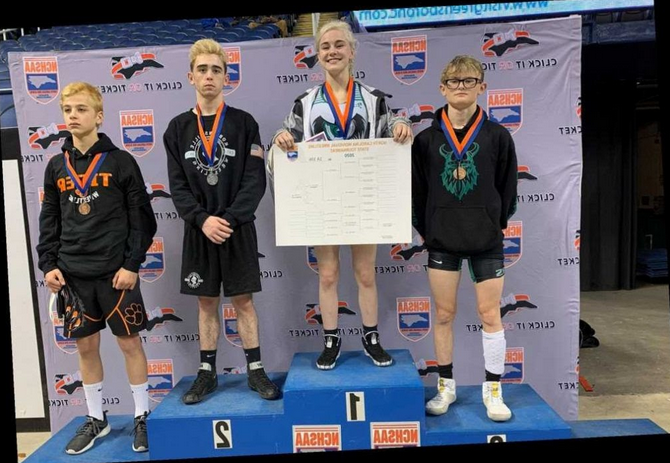 Wrestling can be a sport filled with brutality, aggression, superior strength, and numerous other characteristics that are typically associated with males. All of this was held true before 16-year old Heaven Fitch came onto the scene, and changed the stereotypical wrestler forever.

She is a young lady who is fearless, and she has proven time and time again that she isn’t afraid to hang with the stronger males. She may only be a high school student, but she is looking like she could revolutionize the sport of wrestling. She’s made international headlines since she became the first girl to win the North Carolina High School Wrestling State Championship on February 22 of this year, putting focus on the neglected sport of women’s wrestling.

We have certainly been impressed with what Heaven Fitch has demonstrated so far in her young career, and we’re sure that you will be too after reading through this article.

Who is Heaven Fitch?

Heaven Fitch is a young high-school student from North Carolina, and she is a girl with big dreams for both herself and her career. Recently Heaven made history by destroying a field of boys on her way to winning the North Carolina State Championships for wrestling, something that has never before been achieved by a female wrestler.

Fitch currently wrestles in the 106-pound division, but when she’s constantly going up against supposedly stronger opposition, the challenge is twice as hard. As the story goes, Fitch told her parents when she was just 6 years old that she wanted to be a wrestler. She was inspired by her older brothers, and this inspiration has led her to become one of the most exciting prospects in wrestling for many years.

She may still be in high-school, but the future certainly looks bright for this young lady and her quest for great wrestling achievements.

To understand the media attention around Heaven Fitch we need to understand Women’s wrestling. To many people, women’s wrestling equals the entertainment that we see on tv with shows like Professional Wrestling but the truth is far from it. Women’s wrestling has been growing at a 10% rate the last years and is considered one of the fastest growing sports. Still, less than 17,000 girls and women participate in the sport. Despite the low numbers, one can find odds on women’s wrestling events together with the men’s competitions, on all major sports betting sites like Unibet, bet365 and others found on platforms like the Gamblersbet.com. Since 2004, women’s wrestling is also part of the Olympic Games with competitors from more than 100 countries. Japan, where female wrestling is well developed, has won 11 gold medals since 2004.

Back to the US, many high schools have girl wrestling but with a 85% drop off between high school and college level, the sport has struggled with survival. As more high schools and colleges have started to allow men and women to compete against each other, the number of female high school wrestlers has increased each year. Today, about 21,000 students participate in girls wrestling across 18 states and there are better opportunities for women to continue with professional training but the sport is far from gender equality. The hashtag #WrestleTheGap on Twitter is one of the most recent initiatives to raise awareness to women’s wrestling and the success by Heaven Fitch is exactly what the sports need. Making it easier for women to pursue a career as a professional wrestler will ultimately lead to more professional wrestlers.

Both in the US and internationally, wrestling is one of the few sports where men and women can compete against each other and intergender wrestling is growing in popularity. Wrestling is a sport where competitors battle each other one on one, and they use various martial art methods when they are competing. Wrestling is much less violent than other combat sports however such as boxing or UFC, for this sport is much more focused on precision and technique rather than power or violence. Some fighters may prefer to go for ground grapples, and others may go for submission moves such as those that you may see in MMA. As technique is more important than body size, wrestling has become increasingly popular as an intergender sport.

Why is Heaven Fitch changing the face of wrestling?

We’ve already established that Heaven Fitch has begun removing the stereotypes that males are stronger than females, or that females shouldn’t take part in combat sports. She’s quite literally obliterating many pre-determined attitudes surrounding wrestling, and after her success at the State Championships, the waves continue to power through the wrestling world.

But how exactly is this young lady changing the way that the sport is seen, and how it operates in general?

1. Displaying women and men as equals

2. Proving that unisex tournaments are a feasible inclusion going forward

Usually, the idea of women competing against men in sport has been laughed at, and just simply an idea that is refused to be entertained by the bodies that be. However, Heaven Fitch has just shown that there is a place for unisex sport to take place. Although she may have achieved this incredible feat at the junior level, it will be interesting to see whether this sparks debate for the seniors too.

Let’s not dance around the fact that wrestling is still seen as a male sport, as are many combat sporting events. Fitch has now shown that if you have a passion for wrestling or any other contact sport for that matter, you should just go ahead and strive for your dreams.

What does this mean for the sport of wrestling?

We have a feeling that the governing bodies from all over the globe will have taken note of Fitch’s achievements. More importantly, it attracts attention to the sport which can lead to more opportunities for female wrestlers that want to become full time professional athletes. This could mean major shakeups at both the junior and senior levels, and it could have even lit the match for many more professional women’s events to be held.

Whether this actually happens or not, we will all have to wait and see.

WWE taping two weeks worth of shows, including all of WrestleMania, next week