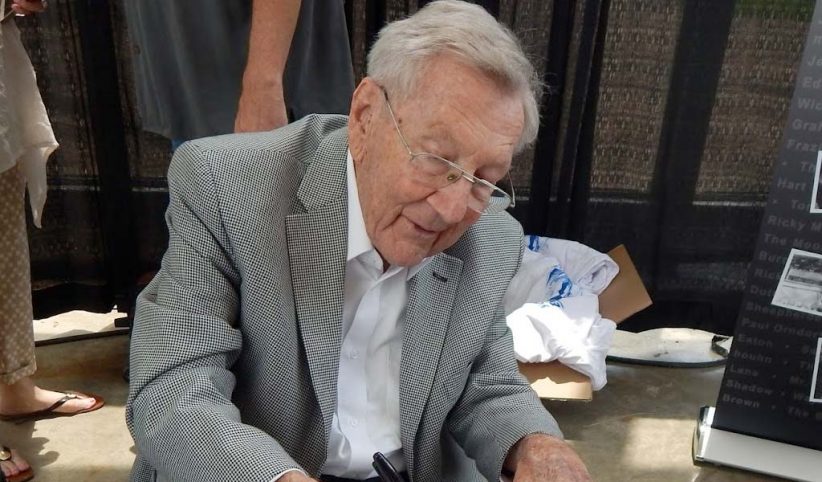 Lance did lead announcing and commentary, primarily in the Memphis, TN., territory from 1959 to 1997 including his WCW stint, where he’s credited with inventing their famous 1-900 phone line that began in 1989 during the Ted Turner full buyout from Crockett. There, Lance finally got to play off his idol Gordon Solie plus doing primary commentary with friends like Terry Funk, Paul Heyman, Freebirds, plus of course Jim Cornette providing the heel color.

Lance said, “I’m always flustered, but tickled to death that wrestling tape-traders had gotten to see and appreciate my work in Memphis. I’d get recognized everywhere I went, but finally figured out how and why. I’m so grateful and appreciative. You know I broke in reading scripted football game text when I began broadcasting at age 22.”

Lance loved telling the story of how he convinced then Memphis promoters Nick Gulas and Roy Welch (prior to Jerry Jarrett taking over) to change Memphis’ wrestling’s time slot to Saturday mornings to draw in the adults not watching cartoons who wanted something to watch when they were getting up.

Many of the boys laughed at him until they drew Japan-like record ratings that will seemingly never be duplicated in terms of market share. He hired a young radio DJ and green TV weather news reader Dave Brown in 1967 to become his on-air sidekick and the duo are regarded as possibly wrestling’s best of all time.

“Jerry Lawler was just a young teen when he began sending us his drawn cartoons of some of our athletes from the Coliseum. I invited him to join us on TV and his love of the business became evident. As he got older, we got him trained and he became our biggest superstar next to Jackie Fargo and Sputnick Monroe,” Lance recounted.

He indeed was the voice of wrestling in Memphis, a city split by racial divides and injustice until top heel Sputnick refused to come out of the dressing room unless the area seats could be integrated between their white and African-American fans. Lance also at times did ring-announcing and full-on commentary from Memphis’ Mid-South Coliseum’s mega-shows.

“I called nearly everything and from everywhere but one of the events I’m proudest of and had the most fun calling was our famous Tupelo, MS., Concession Stand Brawl. Lawler and Dundee versus Blonde Bombers, Wayne Ferris and his partner Larry Latham. And of course our Empty Arena fight between Lawler and the great Terry Funk,” Lance told me in 2003.

Lance didn’t like being abused physically, but allowed Jimmy Hart, the Dream Machine, Funk and even the Road Warriors to “man-handle me for the sake of TV and selling tickets.”

He said he had a good relationship with AWA boss Verne Gagne when the inter-promotional was going on, calling for TV the match where Lawler beat Curt Hennig for the AWA singles title.

Often called the Thesz of announcers, to see some of Lance’s impressive verbal magic with Andy Kaufman just watch the 1989 documentary “I’m From Hollywood” plus Lance’s revisionist magic in the 1999 Jim Carrey Kaufman biopic film Man On The Moon.

Few were as believable as the cool Lance Russell, playing exasperated bystander announcer at some of the inane and violent things Eddie Gilbert, Tommy Rich or Austin Idol would try to pull on top Memphis faces like Lawler, Dutch Mantell, Superstar Bill Dundee, Jimmy Valiant and of course Jackie Fargo.

He’d sadly fallen and broken his hip (the complications of which caused his untimely passing) in a fall last Friday soon after his daughter Valerie herself died in a Memphis hospital following her long cancer fight.

He’s survived by sons Lance Jr and Shane. His beloved wife Audrey died two years ago after a marriage that lasted over 67 years, first meeting in school.

His longtime friend Jerry Lawler broke the news on Twitter and the comparisons to Lance playing Howard Cossell to Lawler’s Ali on classic Memphis television are accurate. There were few duos other than Dick Lane/Fred Blassie and John Tolos, Gene Okerlund and Bobby Heenan who even came close. Lance many times said on my show, “I’ve been around so long, when I started in TV, it was called radio.”

I honored Lance and Bobby Heenan last year at a last-minute Cauliflower Alley Club Las Vegas seminar I was asked to host and put together with a few days notice (someone else had bowed out last minute). With so many great talkers present, I gathered all the boys and simply called it “Wrestling’s Great Voices.”

Lance and Bobby got standing O’s from the others on the dais and contributing from the front row including Jim Ross, Jerry Lawler, Gene Okerlund, Pat Patterson, Pepper Martin, Jerry Brisco, Terry Funk, Akio Sato, JJ Dillon, Howard Finkel and many others who were with us for our primary PM awards banquet later that night.

I was glad I could get a shot of Lance with Bobby but now very sad we’ve lost both 5-star legends. I opened telling our record-breaking crowd that our Mount Rushmore would have to start with Lance, Gordon Solie and Jim Ross for greatest announcers.

Lance was born March 18th, 1926 and is in many Halls of Fame including the NWA, Hall of Heroes, USWA, Memphis Hall of Fame and of course the Wrestling Observer HOF. Most importantly, he’s surely in the hall of fame hearts of wrestling people everywhere “on this little planet we call Earth” as Lance put it.

When I asked how he wanted to be remembered in 2011, he said, “Just as a guy who loved what he was doing, loved his family and wrestling family and hope I’ve made some positive contributions. I hope I left this little planet better than I found it and touched some people along the way.”

Current betting odds for Hell In A Cell main events