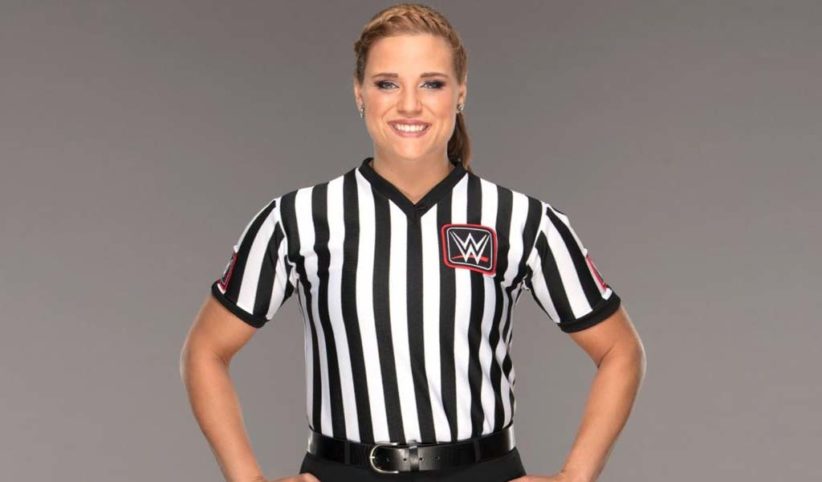 Carr was in charge of the NXT main event between Finn Balor and Tommaso Ciampa last night and after the show went off the air, Carr addressed the Full Sail University crowd.

Ciampa, still selling Balor’s finisher, took the mic and said that NXT are exactly who they say they are, a family, and tonight they were losing one of their family members. Ciampa started a “Thank you Jess” chant as an emotional Carr hugged other NXT referees at the bottom of the ramp. The former NXT champ then announced that she would be moving to Smackdown to a big pop as fans then started a “You deserve it” chant.

“Jess, from the bottom of my heart, congratulations. I’ve enjoyed every single mile we traveled together, I’ve enjoyed every second, I’ve been lucky to share this ring with you. You are one of a kind, you broke down barriers,” Ciampa said, as he complemented Carr as “a gem.” He then invited her to the ring for a proper farewell from the greatest fans in professional wrestling as Ciampa hugged her and raised her hand.

“When you start this journey, not necessarily NXT, but the very very beginning, you don’t know where it’s going to take you. And when I started this crazy journey 10 years ago, I never thought I’d be the very first female WWE official,” Carr said as she cut a promo like a seasoned professional. Carr thanked the “team of zebras” who supported her throughout her journey and said she hoped she inspired other women to do whatever they want in life. Carr ended her address with “We are NXT” as proud ‘papa’ Triple H clapped from the top of the ramp.

NXT to deal with Takeover fallout tonight on USA Network

The Butcher, The Blade, and The Bunny arrive in AEW