Hello fans! It’s @TheMagnumDA with tonight’s Raw report. It’s the go-home show for Money in the Bank, so look for WWE to pull out all the stops and produce a good show before this all-important PPV that will be LIVE on the WWE Network. American viewers, don’t forget that the show starts at 7 PM Eastern/6 PM Central.

ON WITH THE SHOW!

Opening Promo (now with ladders!): All of the Raw participants in the MITB Ladder Match come out to stake their claim as the rightful winner. The most notable thing about this segment? Baron Corbin finally shaved off that hillbilly horseshoe that he called a haircut. Everyone starts bickering at each other, and the segment ends with Braun Strowman warning everyone that this Sunday, they’re going to “get these hands”. You know, if they haven’t done it already, they should make the foam hands and merch them. They’re sitting on a goldmine!

Match #1: Fatal 4-Way: Natalya defeated Alexa Bliss, Sasha Banks and Ember Moon (***1/2) Yes, it went over 20 minutes. However, these guys were going full-blast, which made for an entertaining match. The finish came when Alexa threw Sasha into the post, which allowed Natalya to catch Little Miss Bliss in the Sharpshooter.

Backstage, Owens delivers a peace offering to Finn Balor in the form of olives. Because, as KO puts it, “You like to eat all that vegan crap.” KO tries to recuit Finn to help take down big, bad Braun in the main event Fatal 4 Way. Food for thought, I guess.

Match #2: Dolph Ziggler & Drew McIntyre defeated Breezango (*) Utter destruction. I really didn’t care for Ziggler and McIntyre’s early exit from the Battle Royal last week, but this was a damn good way to get their heat back. Their push starts now.

Jinder Mahal comes out for his supposed match with Roman Reigns. Before the Mahal promo, Cole notes that Brock Lesnar is now the longest-reigning WWE Champion of the last 30 years. Well, that’s one last kick in the balls to Mr. Brooks. Mahal then tells Roman Reigns that they won’t be facing each other tonight. Instead, Roman’s going to face The Great K…fooled you! It’s Sunil Singh. DOUBLE BAIT AND SWITCH. I guess this means Khali is coming back Sunday?

Match #3: Roman Reigns defeated Sunil Singh (w/Jinder Mahal) (No Stars) Another mauling, with Reigns hitting the Superman Punch and the Spear to end it shortly after the one-minute mark. After the match, Mahal catches a vulnerable Reigns with the Kallas.

Match #4: B-Team defeated Heath Slater & Rhyno (1/2*) This match also went under 2 minutes. Axel and Dallas hit the double-team neckbreaker for the win. After the match, Bray Wyatt and Matt Hardy appear. Matt threatens the B-Team by saying, “I will eat you, and DELETE you!” So instead of “taking a shit”, I guess we’re going to call it a “Deletion.” Well, I might go take a “Deletion” during this match next Sunday. 😀

Elias Promo w/Seth Rollins: I actually want to talk about this more in the “Good, Bad, Ugly” section of the report. A brief description does not do justice to how good this really was. Elias completely rips into Seth through a song, and then shows off his prized guitar given to him by John Mayer. Really good stuff. Seth interrupts and clears the ring of Elias, leaving the guitars in the ring. Remember that. Seth says that he actually wants to like Elias, because he’s got a cool thing going with his songs and his guitars. Upon saying guitars, he looks over at the John Mayer Special (already adorned with the Intercontinental Championship) and after a brief tease…he stomps the living hell out of it.

Match #5: Ruby Riott (w/Sarah Logan & Liv Morgan) defeated Bayley (**3/4) I liked this match at Backlash, and I liked this match tonight as well. These two have good chemistry. Match ended when Bayley was distracted by the Riott Squad, leading to a toss in the post by Ruby, followed by the Riott Kick for the pin. After the match, the Riott Squad marked up Bayley using some cosmetics. They branded her with an “R” on her face and her stomach. Big question: Where was Sasha during all of this? If anything happens between Bayley and Sasha, we can look back to this moment.

Ronda Rousey and Nia Jax Face-to-Face: Rousey enters first, followed by the champion. Nia warns Rousey that WWE is different from UFC, because things like hair-pulling, headbutts, and 12-to-6 elbows are allowed. Wait, hair-pulling is allowed? That’s news to me. Jax says to Rousey that she’s not ready. Finally, Jax says, “You may be coming for my arm, but I’m coming for your legacy.” Rousey starts to talk about her accomplishments, saying that nobody thought she was ready then. However, she was BORN READY! Jax headbutts Rousey, but after a counter by Rousey, Jax is caught in the armbar. Nia taps! I guess we’ll have to wait and see if that happens Sunday! Ronda’s acting is still somewhat stilted, but she’s going to be just fine.

Match #6: No Way Jose defeated Curt Hawkins (1/4*) The match was under 30 seconds, but it was a creative idea! After going 0-200 (and getting frontpage headlines for it on ESPN), Hawkins tries to outsmart Jose by being in disguise as part of his conga line. Unfortunately, the schoolboy attempt only gets 2, and from there Jose blasts him with the pop-up knockout for the win.

Obstacle Course Promo: Sami Zayn literally challenges Bobby Lashley to an Obstacle Course. Sami Zayn explains each of the obstacles like he’s Marc freakin’ Summers on Double Dare, culminating with the big rope climb. So good. From there, they hold a coin toss to see who goes through the course first. Lashley wins, and proceeds to dominate the course in less than 45 seconds. As Lashley celebrates with the crowd, Sami jumps him from behind and then hits him with the Helluva Kick. Sami proceeds to then celebrate by taking a celebratory swing on the rope, laughing and smiling as the crowd boos him. I freaking loved this.

Main Event Fatal 4-Way: Braun Strowman defeated Kevin Owens, Finn Balor and Bobby Roode (****) A fantastic main event that featured a wild high spot through the announcer’s table. After KO spent the entire episode trying to convince Balor and Roode to team up on Strowman, they are finally able to knock him out and prop him up on the table. From there, KO grabs a ladder and hits a huge splash onto Strowman through the table. When we return from commercial, Balor and Roode are left in the ring fighting. Slowly, Strowman and KO return to the match and this leads to a series of nearfalls on Braun. The crowd went apeshit when Balor hit the Coup De Grace on Strowman, because after weeks of trying, the fans truly believed this would be the night Balor would take down Braun. Sadly, it was note to be. Strowman eventually destroyed his opponents and powerslammed KO through a ladder to finish the bout. Awesome, awesome stuff.

Outstanding Go-Home Show: They really drove home the advertisements and the promos leading up to next Sunday. I thought that those two Fatal 4 Way matches were really strong, and I thought the promos with Mahal, Elias, and Zayn were exactly what they needed to be. What a build on the Raw side of things!

The Obstacle Course: What more can I say? This was creative, it was silly, and it allowed Lashley to play right into Sami’s hands. Sami was extremely sarcastic and sinister here. I won’t forget that rope swing taunt after the Helluva Kick for a long, long time. Lashley looked like a total freak going through that course, but we all know who the star of this show was: Sgt. Generico! 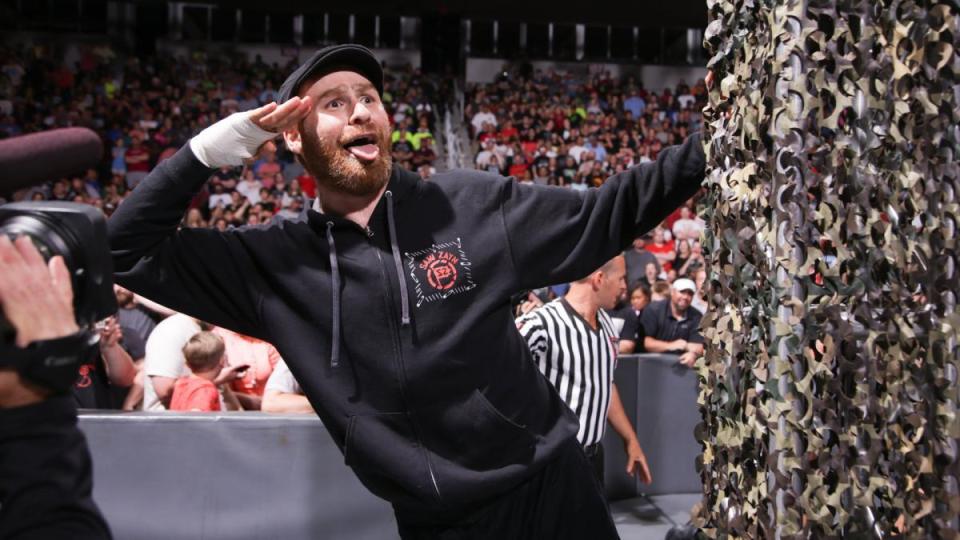 Elias Steps Up: Elias had the best promo of his career last night. He mocked Seth Rollins for his conflicting nicknames (true) and for using Crossfit like a tool (also true). That “Walk With Me” bit is a catchy tune, so I imagine that fans will start singing this in every arena across the country. The guy’s got it together.

Little Rock ROCKED: The crowd was having a lot of fun with this show. They booed the heels, and they cheered for the heroes. The southern states aren’t as jaded and cynical as your New York/Philly crowd. They played right into Vince’s hands, and what resulted was a loud and fun crowd that did not try to get themselves over.

Jinder Mahal’s Double Bait and Switch: It really wasn’t that bad…but it was pretty silly to tease The Great Khali, and then feed Sunil to Roman. I thought the segment was fine, but the fans were not having any of it.

Causing a Riott: Okay, that Riott Squad walk towards the ring (before Bayley vs. Ruby) was so freaking stupid. They basically knock over a bunch of stuff backstage, and then Ruby cuts a guy’s tie in half before laughing at him and walking away. WHAT ANARCHY! These girls are just sooooo punk. That said, I *did* like the “R” branding on Bayley. That could start to catch on, the same way Ted DiBiase used to leave $100 bills in his opponent’s mouths.

Okay everyone, that’s going to do it for the go-home MITB Raw report! See you tomorrow for the Smackdown Live TV report! Also, don’t forget that next Sunday, the W-O Pick’em Crew will be BACK for Money in the Bank! Come check out the site before the show, and let us know your picks on Twitter! @TheMagnumDA, signing off.