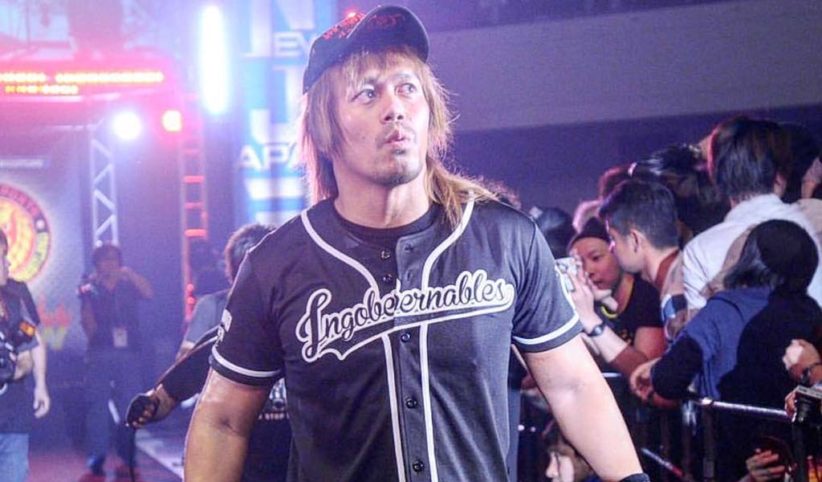 Part 2 of Destruction brings us to Beppu, and besides the main of Naito vs Suzuki, brings the match I most anticipate: Hirooki Goto’s NEVER Openweight Championship is being challenged for, first time one-on-one, by Taichi, the man who never held a title, but who is quickly evolving from comedy to a crowd-favored underdog. Will he succeed? Let’s find out!

It’s good to see things get back to normal, with all the veterans back and tagging with one of the Young Lions. In a previous report, I wrote that Tsuji is the heavier of the Lions, but that was clearly wrong, here he looked as skinny as the rest, indistinguishable from Uemura without a close zoom. Yuji Nagata makes Tsuji tap out to a crossface armbar.

There are some rumblings that Henare will abandon his Taguchi friends and join Firing Squad, out of frustration. This would be a good place to plant seeds for this. Much much better than it had any right of being (considering it’s an opening Young Lions tag match featuring two of the poorer New Japan wrestlers from a not so popular group). But everything was done so well, up until Finlay’s stunner on Umino for the 3, which was so awkward it looked like it was blocked. No signs of tension.

That’s right, you read that correctly. Ayato Yoshida vs Takashi iizuka, a singles match, between a new recruit, who has yet to get a win, and an old wrestler, who primarily acts crazy rather than actually wrestles (and hence, is usually used in tag matches or for interference). Oh well, it’s interesting at least. Iizuka at one point grabs Kevin Kelly and Kelly asks him what he wants, to which Iizuka just keep holding and eventually throws Kelly into the guardrail. Very funny. Yoshida wins by DQ, when Iizuka hits him with the claw punch.

At one point, Okada holds up Tanahashi and offers White to hit him. White gets back into the ring instead. Yoshi-Hashi a little later held up Honma for Okada to hit and Okada hit the big boot, then nodded at Yoshi-Hashi. For the finish, Juice had Yoshi-Hushi in Pulp Friction, but Yoshi-Hashi blocked and applied a full nelson. Jay White got in and tried to fivearm Juice, but Juice ducked, and yeah, you can guess what happened. One Pulp Friction later, it was all over. The best team tag match in quite a while.
Okada helped Yoshi-Hashi, whereas White was more perjorative. Yano tried to act the peacemaker. As Okada picked up Yoshi-Hashi, the latter threw him off.

I have praised Taichi lately, but at the beginning instead of showing how much he wanted the title by attacking before the belt, he on the opposite ran from Goto. We had 5 minutes of stalling Taichi, helping Taichi, slowly kicking in a semi-taunting manner Taichi. Not till Goto got involved did the match finally begin to speed up. As Goto went for GTR, Kanemaru clobbered him from behind, and ref didn’t see it, due to him facing away. Goto destroys Kanemaru and sets up Ura Shouten. Desperado runs in and is cleared out. Roppongi 3K come in to get Suzuki Gun members out of there. Taichi swings his mic at Goto. Goto ducks. Ushigoroshi, cover. No ref. Red Shoes is face down on the outside. Goto beats up Taichi and nails a Penalty Kick. GTR. 2 count. Right now we might see Iizuka…he appears right on cue. He tries to get into the ring. Red Shoes runs to stop him. Ura GTR being set up, but Goto stops it to punch Iizuka off the apron. Claw goes flying. Goto turns back and tries to kick Taichi, but he brutally nails him in the groin. Taichi Clutch! That’s a 2. Iizuka gets up on the outside. Head kick by Taichi, I don’t even know when he lost his pants. High Rise bomb! 2! Goto is shaking it off, he is in recovery mode. Black Mephisto! 1, 2, 3! Taichi is the new NEVER Openweight Champion. Miho Abe crawls in, crying.

WWE and Impact officials meet in Stamford at WWE headquarters