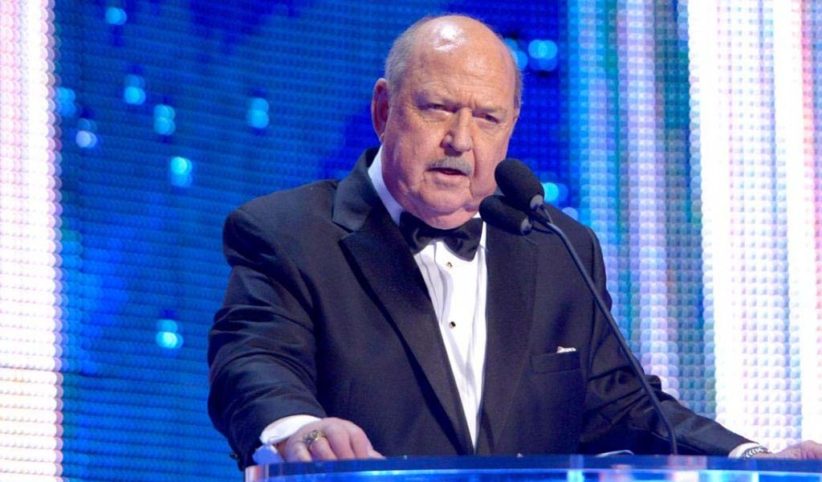 Tributes poured in immediately as soon as the news broke that WWE Hall of Famer Mean Gene Okerlund passed away. The many, many comments from past and present Superstars who worked with him shows you exactly what kind of character Okerlund was.

The popular backstage interviewer and occasional host passed away at age 76 today. Below are some of the tweets that his peers left to remember the one and only Mean Gene Okerlund.

Ric Flair: “You Will Forever Be MEAN BY GOD GENE!”

Jerry Lawler: “So sad to hear of the passing of our friend, Mean Gene Okerlund. I’ll always remember Gene with a smile on his face and a drink in his hand and always wanting to help. His was “The Voice” of @WWE”

Chris Jericho: “He was the greatest interviewer in wrestling history. He taught me SO MUCH about how to do a wrestling promo. He was a great guy, with a glint in his eye and a joke in his heart. He was @thegeneokerlund. Thanks for being the best in the world at what you do #MeanGene!!!”

Hulk Hogan: “Mean Gene I love you my brother”

Stephanie McMahon: “Gene Okerlund was an incredibly rare talent. He made everything and everyone better. #ThankYouMeanGene for all the incredible memories. Our condolences to his family and loved ones.”

Triple H: “A voice and sound track to an entire era of our industry. He was the star of some of @WWE’s most memorable segments. “Mean Gene” was beloved by all who got to work with him. Our thoughts are with his family at this difficult time.”

Bruce Prichard: “RIP Mean Gene Okerlund. Gene was the mold others aspired to be. Without a doubt one of the most talented individuals I have ever had the privilege to work with. Rest in Peace Gene and thank you for all of your wisdom and help throughout the years.”

Tony Schiavone: “Devastated to hear the news of my friend Gene Okerlund’s passing. He was, and will always be, pro wrestling greatest stick man.”

Michael PS Hayes: “So sad to hear of the passing of Mean Gene. What a classic and was in a category all his own. Will always treasure doing the Legends of Wrestling shows with him.”

Gerald Brisco: “The world off professional wrestling is sad today by the loss of the legendary Gene Okerlund one of the best to ever hold a microphone in any genre of sports entertainment.”

Hurricane Helms: “RIP Mean Gene! A voice that was powerful and as easy to recognize as any in the business. Gene was always the friendliest and nicest guy to me. Thx for the memories my friend.”

Jeremy Borash: “Growing up in AWA country, I never wanted to be a wrestler. I wanted to be Gene Okerlund. A wonderful friend and mentor for the past 20 years. There will never be another like him. RIP my friend.”

Steve Austin: “Just heard Mean Gene Okerlund has passed away. As an interviewer, pitch man, announcer, or host, he was untouchable. Simply the best. Total professional with quick wit, sarcasm, humor, and that golden voice. Condolences to his friends and family.”

The Iron Sheik: “Mean Gene was best man at my wedding. He sing, he dance, he always was there for me. Always leading the way at the bar with the legend. God bless him.”

Million Dollar Man Ted DiBiase: “WWE universe has lost one of its greatest announcers and truly one of the nicest guys you’d ever know. “Mean” Gene Okerlund, RIP my friend.”

Jim Ross: “So sad today to hear of the sudden passing of my dear friend @TheGeneOkerlund I just saw Mean Gene in North Carolina at WrestleCade. It’s so true that our tomorrow’s are never guaranteed.”

Charles Robinson: “So sad to hear of the passing of one of the greatest voices in wrestling. Mean Gene you will be missed and we will continue to love you. What a true class act. I am very fortunate to work with you.”