A lot of people will be surprised at the fact you can place bets on the results of professional wrestling matches. Yes, the outcomes are pre-determined (that sounds so much better than fixed) but it’s the companies promoting the matches that decide who wins and who loses, so if they keep that to themselves, everyone else is none the wiser.

Recent years have seen a growth in the number of UK bookmakers offering odds for WWE’s flagship events such as WrestleMania, SummerSlam, The Survivor Series and the Royal Rumble. They hold an increasing number of events and odds are available of them. The emerging betting markets now cover all the main three-hour spectaculars, with Roman Reigns currently 15/8 to win the 2018 Royal Rumble.

Despite the increase in the numbers of events being held by British companies such as Revolution Pro Wrestling and Insane Championship Wrestling, there aren’t any odds offered on their shows, but perhaps that may change in the years to come.

Who’s Going to Be the Champion?

Some of the first odds offered on professional wrestling was a market on who would be the WWE Champion at the end of the calendar year? That was back in the days when there was just one main champion; it’s not an easy market to bet on, gone are the days when the likes of Bruno Sammartino held the WWF title for eight years in a row.

There are so many factors that fit into a bet of that nature. Injuries, of course, can occur at any time. Finn Balor won the Universal title last year but a shoulder injury caused him to vacate the title the following day. Then there’s the possibility of disputes taking place, causing wrestlers to either leave WWE or be demoted to mid-card matches.

If this year, you’d offered odds on who the WWE Champion would be on June 1, not a soul would have placed a penny on Jinder Mahal holding the title. He’s always been a mid-card performer and never even had a sniff of a major title. However, WWE want to expand in the Indian market so having an Indian champion is one way of achieving that.  That shows how you need to take a long look at the company and their future plans to work out who might be the big winners.

It’s always interesting to follow the odds that are available on the listed events. Take this year’s Royal Rumble, for example, which was won by Randy Orton. The Royal Rumble has 30 wrestlers battling to win a title match at WrestleMania, the WWE’s largest show of the year. Odds fluctuated wildly in the weeks leading up to the match.

One minute, The Undertaker was favourite, then it was Braun Strowman; it wasn’t until the days before the match took place that Randy Orton became heavily odds-on to win the match, which he did. Odds changes of that nature rarely happen in other sports but are commonplace in pro wrestling so it’s best to place bets as late as you can. Wrestling is like a soap opera, just as the odds kept changing on who pushed Ken Barlow in Coronation Street, it’s the same situation as far as who’s going to win the next big WWE match. 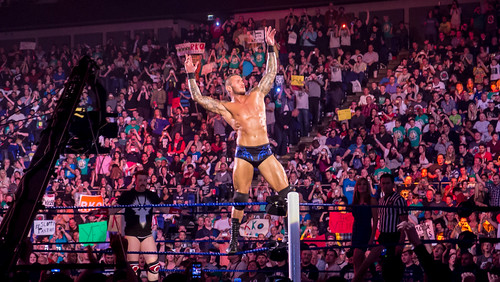 “Randy Orton at Smackdown taping in Londo” (CC BY 2.0) by interbeat

Are there leaks from WWE that influence the betting?  There was a Reddit account holder, Dolphins1925 who continually successfully predicted the results. The recent Extreme Rules PPV saw European bookmakers successfully predict the winners of each match, although of course, the odds available wouldn’t have won you a fortune, even in an accumulator. In the past, such occurrences would never have happened when the world of wrestling was a lot more secretive.

Sometimes, we can all be caught out. The return of the Hardy Boyz at WrestleMania 33 was a well-guarded secret. They didn’t just return but won the Raw tag team titles, so anyone betting on that market didn’t stand a chance of being successful – again another potential hazard to look out for.

A lot of the time, the odds are too short to place bets on.  Who wants to risk cash on a 1/16 favorite?  However, you can get some good wins because of the fact a champion can lose via DQ or count-out but keep their title. A wrestler can lose their bout in that fashion, which might not harm their career and further a feud, but it can also result in a win at decent odds: back against the cheats and it can be profitable.

Betting on a pre-determined result may sound strange but it is emerging as an important market with an increasing number of UK bookmakers offering odds. WWE hold PPVs every couple of weeks now, so there are plenty of opportunities out there. As you’ve read, though, it’s not an easy market to get good wins out of, but as with everything, having a bet on an event does add even more interest to it – but it’s not as easy as it sounds.

The Miz and Maryse selling their Los Angeles home for $3.65 million