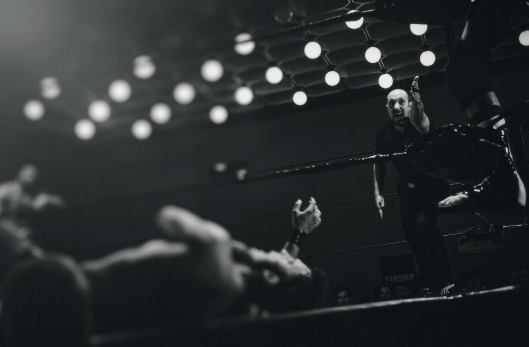 We’re almost a year into the latest wrestling ‘war’, this time a battle between WWE and industry upstarts AEW.

While the coronavirus pandemic has meant the ‘Wednesday Night Wars’ has gotten off to something of a false start, empty arena shows and some inventive workarounds have given us a good sense of what Cody, Tony Khan and the rest of the minds behind this new promotion have to offer as an alternative to WWE’s dominance.

Many wrestling fans will say that Vince McMahon’s WWE is too big to fail. Since attaining total domination of the industry little under two decades ago when he purchased WCW, McMahon has gone largely unchallenged.

However, if recent shows and a growing online buzz is any indication, WWE should be looking over their shoulder prepared for a real challenge from AEW once things return to normal.

Ratings are everything in a wrestling war.

Since WWE Raw and WCW Nitro tussled over millions of viewers every Monday night throughout the mid to late nineties, ratings have become the benchmark by which a wrestling promotion’s success is measured.

While AEW and it’s Wednesday night counterpart NXT are not quite reaching the heights of the premier shows of the 90s, ratings and particularly performance in the key 18-49 demographic are still a hot topic for fans of both shows.

If the ratings we’ve seen so far are anything to go by, WWE should be very concerned about its third brand’s performance against AEW Dynamite. The new TNT show has almost consistently beaten NXT in both overall ratings and the key demographic — winning just eight of the 41 evenings the two shows have gone head to head in the overall ratings. Such a consistent performance that you’d want to head over to OnlineCasinos.co.uk, find the best online casinos to bet on wrestling and put a bet on AEW winning the war.

The initial buzz of AEW has very much worn off, so the minds behind it will be pleased to see their ratings stay consistent and more importantly beat WWE’s offering. WWE on the other hand has an important decision to make — stick with NXT as opposition or up the ante?

How they’ve dealt with coronavirus

Although both AEW and WWE may not have anticipated it, one of the main ways they would be judged throughout this war is their response to a worldwide pandemic.

Coronavirus has thrown both the sports and live entertainment worlds into absolute disarray. Unfortunately for wrestling companies, what they do falls into both categories. That means no crowds, no touring arenas across the country and no public events to grow your brand.

Somehow though, both AEW and WWE, though not without criticism in the latter’s case, have found ways to continue running their weekly shows and PPV events throughout the pandemic. Results have been mixed, but amongst fans, it’s quite clear which company has been able to ride this unexpected wave more positively.

AEW has been able to make their shows feel more exciting and impactful throughout the pandemic. Unlike WWE’s offering taped at their training Performance Centre, which has been hampered by a lack of crowd, intensity or consequence, AEW instantly perfected the art of breathing life into an empty arena, as CBR reports.

They position the camera away from empty seas. They put wrestlers around the ring to deputize for the crowd and provide some atmosphere. They’ve innovated in ways that have not cheaped the show but taken advantage of the unique situation.

Although WWE have relented and used trainee wrestlers to provide a crowd atmosphere, their creative offerings in the form of cinematic matches have been hit or miss. As WWE deals with a highly publicized outbreak of coronavirus at their tapings, you have to wonder whether fans are questioning their competency.

With AEW Dynamite heading towards recording more shows without a crowd than with one, the company finds itself having fought through a very tricky period that may have sunk a less prepared company.

The pull for other wrestlers

For years hardcore wrestling fans have criticized WWE for what they deem poor use of an undeniably incredible roster.

Since New Japan started to get some buzz around the mid-2010s and the first rumblings of AEW’s launch, many fans have wondered what it would be like if underutilized talents such as Cesaro, Sami Zayn and Daniel Bryan jumped ship and had more creative freedom than the WWE machine allows for.

It’s not just fans that have been pondering this though. By all accounts, many WWE wrestlers are wondering if the grass is greener on the other side or on another mat.

The success of high profile WWE talents who have jumped ship to AEW and completely reinvented themselves, from Jon Moxley to Neville to FTR, must be making some disgruntled members of the locker room take stock of their current situation.

In recent years WWE has amassed, some would say hoarded, one of the best rosters in wrestling history. Having squandered much of that talent through bad storytelling or spiteful mishandling, is WWE setting themselves up for a major failure down the line? What if more WWE superstars start to head to AEW, in hopes of more opportunity to shine without the reported bureaucracy of WWE?

So far, AEW have not made the mistakes companies such as TNA did, hoovering up every ex-WWE talent that came their way. They’ve been smart and selective. One big name jumping ship isn’t going to turn the industry around as it would have in the late 90s. But the idea of AEW’s already talented roster being bolstered with WWE converts looking to prove a point supported by a crowd who wants nothing more than to stick it to the mainstream? That got to give McMahon and co pause for thought.

It will take an absolutely seismic shift in public perception towards wrestling for AEW to get anywhere close to dethroning WWE at the top of the industry. But as WWE’s product continues to flounder and their reaction to coronavirus gets messier by the week you have to wonder whether a good portion of the hardcore audience will permanently switch to watching Kenny Omega, The Young Bucks and the rest over at AEW.